Because the "Hunger Game" series is my first time being sucked in to a good book series (I know, I know.. somewhere someone just hissed their vampire teeth at me..) I am on the learning curve about when one should actually read during the day.
Say, for instance, if you have small children. One would have to catch on rather quickly that getting sucked into the "arena" is NOT a good idea when you have, say, a toddler and they are awake.
Because, when all you can hear is the cry of Katniss for Peeta you may miss out on the eerily silent toddler. And we all know that a silent toddler is way more scary than anything President Snow can throw at you.
Take for instance what one might find when they walk into the kitchen, after the toddler walks up to me (obviously engrossed in the third book) with sugar coated hands... 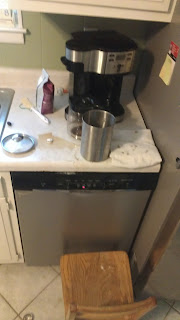 yes.. he certainly did (under all manner of stealth like movements) move the chair up to the counter, and proceed to pour coffee into the sugar bin. And then play around a bit.. 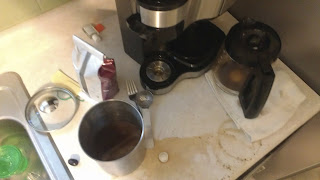 Notice the nice coffee in the silver sugar bin?
Obviously, he did this in defiance of the rations in District 13.
And in direct response to my absorption in this series.
Serves me right. Lesson learned.
Next time, I read when he is safely asleep. 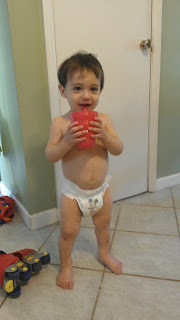