in which we all get in the bathtub..

Last week we had some severe weather in Alabama. Everyone got out of school at 12 noon for storms that were coming at 4pm. (slightly irritated at that.. but I will move on).
Since this was the first time we've had an actual Tornado pass through our area.. ever, the kids were amazed at what they were seeing.
Here they are enjoying the massive downpour and occasional hail. Even Isaac is watching. 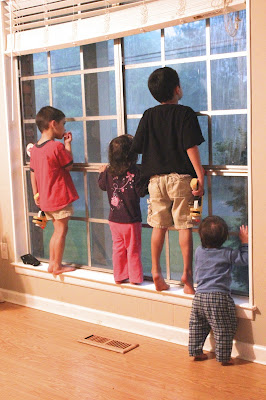 But as the sirens were blaring and James Spann (our local weatherman genius) was warning.. AND my five year old was begging.. we headed to "safety." I told them they could bring the Nilla Waffers and their pillows. Well, then it wasn't so scary anymore. Jorge brought his gun in case, you know, the tornado brought in some bad guys. 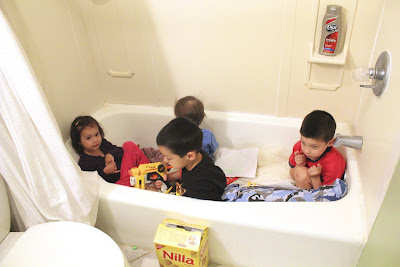 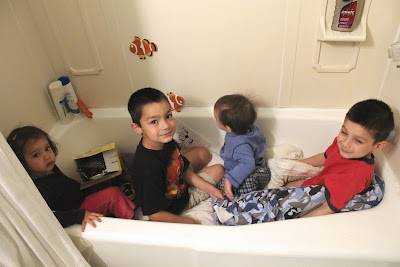 and we stayed in there all of five minutes.
The Tornado decided to go further south and head on out of our county.
I did learn a valuable lesson that day: if you have a dramatic five year old, no matter how much you tell him that everything is going to be fine and you yourself remain as calm as a cucumber (even though you are a bit nervous because daddy is downtown still at work).. your dramatic child will still be a worrier. So take it easy on him. He is built differently than you. And that's okay. He will learn to trust over time.
And it's probably best to appease him when he is pulling you in to the bathroom so you won't get sucked up by the tornado.
Posted by Rachel Garcia, CD(DONA) at 3:26 PM

Email ThisBlogThis!Share to TwitterShare to FacebookShare to Pinterest
Labels: life with kids

Alex looks gripped, all curled up in the corner.

Aw, how precious that he wanted to protect you. So sweet!