in which I stir the pot of controversy..parenting edition.

I haven't rocked the boat in a while. I've kept my posts very mellow and non-hot button issue-ish.
Until now.
I know I am going to get a debate going over here.. but I can no longer.hold.it.in.
What do you think of when you see this?: 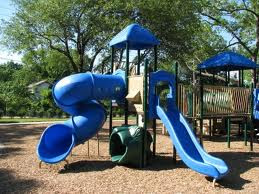 There seems to be two types of momma's out there. The kind that sees this as an opportunity to teach your child conformity to rules and absolutes and the mom that could give a rip and just says, "have at it. Just don't destroy the equipment."
I betcha aren't sure which one I camp in.
Ya see, there is no sign on that equipment. Contrary to the ones at Chickfila that say "NO CLIMBING." the equipment above is meant to be climbed on. However, I'm sure not every child is like mine (or my sisters' since hers were doing it too) and will climb on the outside of that slide or traverse the outside of the bars on the walkway.
But I ran into a mom that was of the first mindset and yelled out in the direction of my child but supposedly to her child (who wasn't climbing on the outside), "yeah, and play on the equipment the way it's meant to be played on."
Please, dear mom, tell me what that looks like.
Here is my thing.. i understand the philosophy behind "up the stairs down the slide." I used to preach it all.the.time.. until my boys reached three years old. And I realized that they wanted the challenge of climbing up that slide. Heck, I realized i used to do that too.. remember these?: 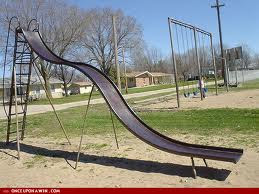 I used to have a field day going up those things. And trying not to get burned, btw. But I don't allow my kids to do it when someone else wants a turn going down the slide. So there are some restrictions that apply. But I don't hold the overall philosophy that these things are NOT meant to be played on that way. Like it's some kind of kid code. Otherwise, as my sister so eloquently pointed out, "then no kid would ever climb a tree." Then I argued that those that hold the first opinion about the play equipment likely aren't too comfortable with their kids climbing a tree. But that may be too much of a generalization that isn't true. But if its not, then please tell me why the tree is okay but not the slide.
Anyway, here is my point. I think there is a whole parenting philosophy to be discussed here. I am all for rules. I don't let my children climb on the CFA equipment, well, because there is a sign saying not to.
But barring destroying property.. I allow my children to climb on playground equipment. And yes, I do intervene if they are about to hurt someone.
I don't know where you stand on the issue.. but I am fine with my children climbing. And if you are not comfortable with it, maybe you can adopt the motto we have in our family: "Others may, you may not."
that is all.
feel free to express your opinion. ;-P

Email ThisBlogThis!Share to TwitterShare to FacebookShare to Pinterest
Labels: hot topic, I am so awkward sometimes, life with kids

I don't let mine go UP the slide. Why? Because it's a "slide" not a "climb" and usually someone else is trying to get down. I'm trying to get my children to be, even if mildly, aware that there are other people in the world beside themselves (this is harder than I thought) and so I stand and police the slide when my children are on it. I explain to them that slide means down, and there is no climbing. There are plenty of other things for them to climb on that will give just as much satisfaction. :)

Oh yea, and if someone else's kid is doing it and mine can't even get down the slide, yes I get irritated, but I'm also trying to teach mine that when other people behave differently and make life "inconvenient" (that's the only word I can think of for this circumstance)we just mooooove on.

well i should clarify that i don't let them go up if someone is trying to go down. but if no one is there..what is it hurting? besides.. a tree is a "plant" not a "climb." :-)

Yes, and God created the tree. There would never be a sign that said "do not climb" from God.
But we created the slide, to do just that, slide.
For the record, I don't like my kids climbing trees either. :)

My kiddos (especially my boy) climb high and use their imagination, gross motor skills and build muscles going up and over all the equipment. How can you play war/battle unless you have a watchman on top of the tower? We get tons of looks, and sometimes my weenie side gets the best of me and I tell them to get down and be careful. Only sometimes. BUT, I do TRY to encourage my kiddos to follow the no climb the slide rule (but, if we're the only ones around then they can have at it). I've seen traffic and confusion in the slide department. 8 kids jumbled up in a tube is too much for me. That's the only rule I have. Well, and to be EXTREMELY thoughtful to others. Oh, and babies/toddlers always go first and protect/help them. ALWAYS.

I guess I am not realizing the assumption that ALL kids are mean. They are a blank slate and do have to be trained to be kind to others that are playing with them. I don't allow my kids to tromp on other kids. I will intervene. but if no one is on the slide.. i say have at it.

Be considerate of others in all things (and don't be destructive) but otherwise go for it, that is my philosophy.
If I only allowed my children to use things for its intended purpose invention, creativity and discovery are greatly limited.
Others may but you may not, I say this to mine all the time, we are all different and I respect others positions, may not agree with it but respect it. I promise I won't make your child climb up the slide as long as you don't tell mine they can't.

I'm in complete agreement with you on all the points you made. I believe that play equipment is for play - whatever that looks like as long as we're not infringing on someone else's fun with said equipment or breaking any written rules.

What drives me nuts is the parents that gasp and run to "spot" my kids as they're climbing on stuff. I know they're little. I know they may fall, and I certainly spot them myself if I feel like there's a risk of major injury. But, they're both climbers and are pretty dang good at it, and I just feel that although I'm sure we'll face some bumps, bruises and broken bones along the way (hopefully nothing worse), I'm just not going to be that worrying type of mom that shouts "Be careful!" at my kids 6 dozen times while they play on a piece of equipment designed for play. Kids need to be kids and I feel like it's good for them to develop the coordination they need to climb things on their own (and fall sometimes) without fear or hysteria being instilled by me (while adhering to posted rules and common courtesy, of course). That's just me.

Lindsay.. I couldn't have said it better. I agree with you whole heartedly. But that, too, is a philosophy of parenting. How much do you protect your children from getting hurt. ahhhh.. a whole separate discussion.

What do I think?

I think, "Wow. I miss the days when my biggest concern with my kids was their use of playground equipment."

Enjoy the discussion, everyone! We're thick in the middle of driving, college scholarships, and the like.

I'll take your kids to the playground anytime :)

I also don't let my kids go up the slide. My thinking is that everything is just easier if they aren't doing that. They don't run the risk of getting kicked in the face by someone coming down and I don't have to police the slide to make sure they're off it when some other kid is trying to come down.

As far as playing on the play ground however they want, I'm cool with it as long as they aren't getting in anyone else's way or hurting anybody. And if I'm being honest, if I see them doing something that I know they're aren't big enough for, I'm gonna hop up and get ready to catch them or assist in the climb.

My only rule at the Playground is, when Mom says its time to go get in the car without crying. We have taught our children to use logic and be considerate of others, so if they choose to defy either of these things they have to live with the consequences. Be that a shoe in the face or a disgruntled mommy. I don't allow them to be as adventureous when other children are playing too, however if those children's parents are from the same "camp" they can climb with them all they want. Ya' know, my homeschooler mom taught us pretty well that the reason we did not conform to the rules of taking kids to school was that she wanted us to utilize the time God gave us as children, to be children. He has leason's for us to learn while kids are in that age group because of the grace that is provided for them during this time in their life. If I wanted my kids creativity and imagination to be stifled I think I'd sign them up for school/daycare so they could learn to stand in line. Meanwhile, in the real world risk is rewarded, and the playground is a realitively safe place to practice taking calculated risks. Of coarse, I also let my children play outside without me hovering, and sometimes they even wipe their own behinds... TMI?

Well, let's see. I probably fall in the too protective category. I'm with Greta, if I see my child stretching too far beyond her limits, I will stand behind to protect. I haven't faced the slide issue yet with my child. But as a teacher it drives me crazy. Most of the time, I would have to police the slide because traffic jams happened. It seems to create more confusion when public equipment isn't used how it was designed. But I would probably let my child go up our own slide or if no one else was at the playground at all, if she was old enough to handle it. And i will definitely allow her to climb trees and other items, within parameters. But to each his own. Just don't knock my kid down in the process. :-)