Do you notice a pattern here? 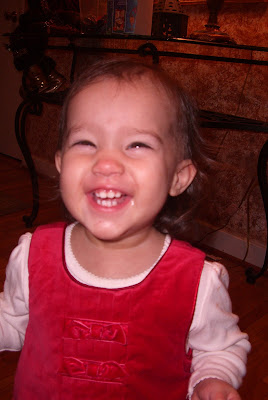 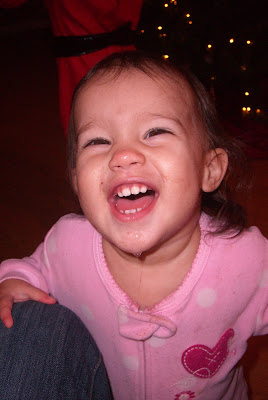 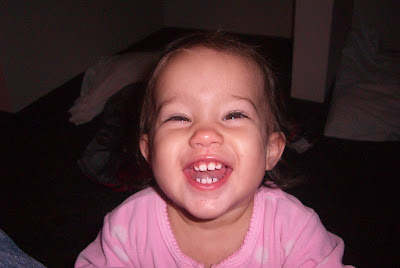 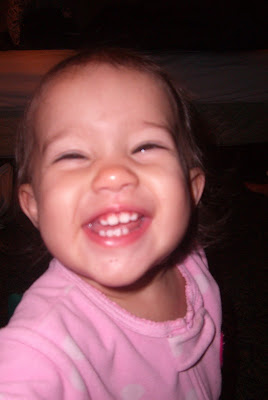 This silly monkey smiles AS SOON as she sees you bring the camera out.
Geez.  What a ham, huh?  but she sure is adorable.
Posted by Rachel Garcia, CD(DONA) at 7:42 PM 2 comments:

To sum up some things since my last post:
We are expecting a bouncing baby BOY! Found out two weeks ago.  His name will be Isaac (middle name pending) which means "laughter."  Certainly what we did when we found out we were expecting him.
I doula-ed a birth last week for a mom having her 4th.  The super mom did 45 hours of prodromal labor and then 18 hours of active labor before she delivered her precious little girl.  (birth story to follow, seperately).
I turned 32 years old on the 18th.  Two days later I was in the hospital with a kidney stone.  That is such a long story but suffice it to say that a pitocin induced, unmedicated birth (Eva) was a walk in the park compared to that stone.  That is NO exaggeration.  I came home with them saying I had a 7mm stone and a less than 50% chance it would pass on it's own, but alas, because I am pregnant that treatment was limited and not recommended. Two days later I was in the hospital again.  The reason we went in is because the Loratab did NOTHING for the pain, and while it was not a 10 on the scale as before.. it was an 8, and was not getting better.  This time we found out the stone had apparently broken up into two smaller stone, one in the bottom of my kidney and the other passing through the ureter.  So "this to shall pass" comes to mind.  And i came home Christmas Eve afternoon.  Sooo thankful that I made it out of that hospital in time for Christmas.  And now we just wait for the stone to pass and pray for no more "episodes."  (will keep you posted).
-My kiddos enjoyed Jesus' birthday celebrations today as well as all the presents they got on His birthday! LOL. I really think we may have gone overboard.. compared to the three gifts they each got last year.  Light sabers, books, six shooters w/holsters, baby dolls, sticker books, leapsters, movies.. to name a few.  whew..
I hope everyone is doing well and i am hoping that things start to slow down as we ring in the new year.  Praying, actually.. LOL.
Buenos Noches..
Posted by Rachel Garcia, CD(DONA) at 10:13 PM 4 comments: