I"m only HALF crazy! 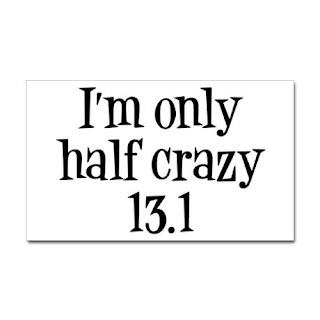 Well, I did it.  I ran my first half marathon!! And what a fun weekend it was.

I handed off the kiddos, on Friday, in two different locations (younger two to Tuscaloosa with my younger sister Rachel and the older two with my OLDER sister, Mishka in Montgomery).

Then, me and the hubs were Pensacola bound!! And an added bonus: our friends Kristen and Jesse were there too!  Kristen is "full crazy" because she was running her first FULL marathon.  Wow!

So we arrived Friday night and connected with Jesse and Kristen and ate dinner at Pegleg Pete's.  Being sure to start my weekend of "carb loading" (yes, I know it's only for the night before a race and not two days out) I chose to eat this: 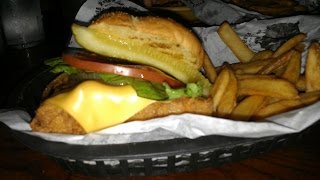 the grouper sandwich!
And then we went to get coffee and chat!!

The next morning I awoke to this view from our hotel room: 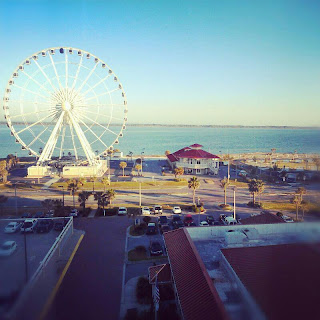 Then we did a laid back 2 mile run to loosen up the legs for Sunday. And then we went to breakfast.  Y'all, only a picture will do justice to show what I ate. 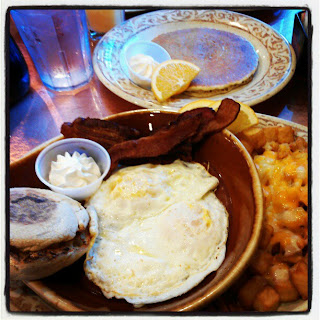 I eat the same, if not more, than a grown man.  I said I wouldn't eat the pancake but I ended up eating half.  Again, carb loading. Right?

Then we went to pick up our packets.. and drive the course. 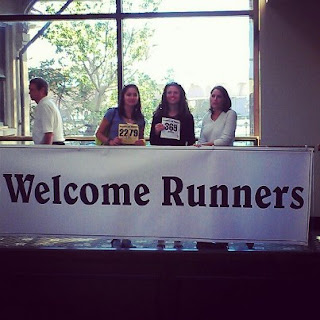 *It should be noted that everyone was fine driving the course, until we veered off to follow the marathon route.  Everyone kept commenting on how boring it was to drive this route. LOL.  And poor Kristen was the only one "manning up" to run it.  26.2 miles is a loooong run.  (like I said, I'm only half crazy.. at this point).

So then Jorge and I headed back over to the beach to get the necessary beach pics: 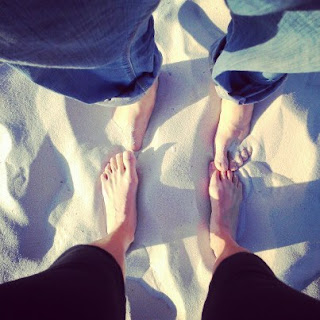 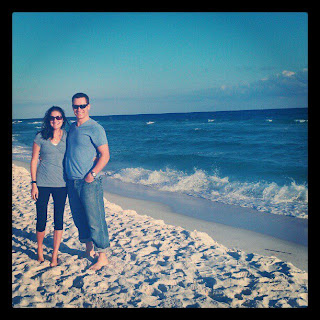 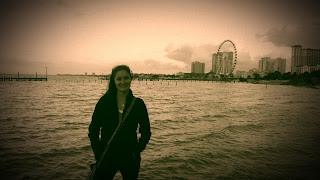 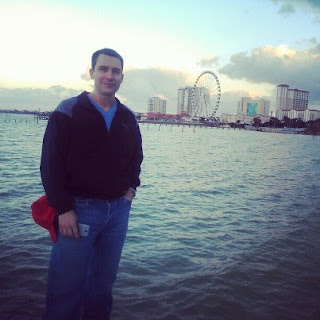 Ahh.. it was refreshing.  I loved being able to just have some "us" time.  Then we headed back to Mollie's house (who was hosting us Saturday night) in time for some yummy pasta (more carbs, YAY) and unfortunately, a terrible Alabama football game.

Then it was time for an early bedtime and an earlier wake up call.  It was 4:30 when my alarm went off letting me know it was time to stuff my face with a cream cheese bagel sitting beside my bed.  Then roll over and try to go back to sleep.  The final alarm going off was at 5:10.  Time to get ready.

Much to my chagrin, we arrived by 5:45 and in time to use one of these: 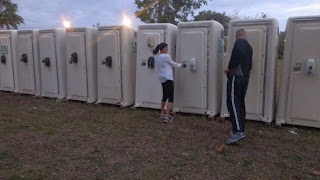 (thank you hubby for yelling "GOOD LUCK, BABE" for everyone to hear).

Then it was time to go stand in line and wait: 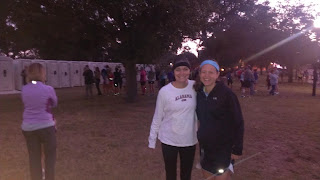 (it was a wee bit chilly, even for Pcola) 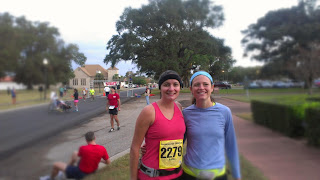 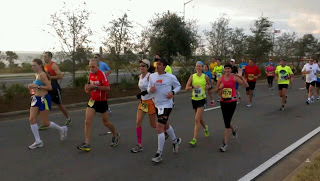 (in the second mile.. still smiling..)

And then I did it!! I finished.  13.1 in 2:02.  I'll admit it.  I was really hoping that I'd finish in under two hours but when I hit a wall at the 10 mile mark (my foot was hurting..among other things) I was just so glad that I finished.  When I ran my 10k last weekend I was on pace to finish in under 2 but like I said, I slowed down at the end and couldn't get it back.  But needless to say, I have no regrets! Just another reason to train harder!

I also had a nasty chaffing spot under my arm so I had the pleasure of getting that "taken care of": 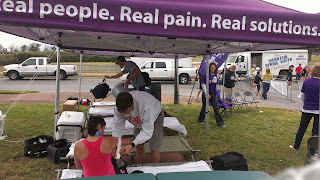 And you better believe I took advantage of the free massages: 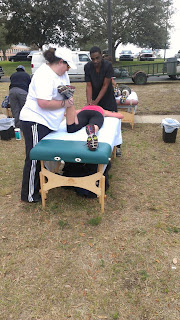 And My gal Kristen wanted to finish her first marathon in under 4 hours.  And that girl finished in 3:57!!! 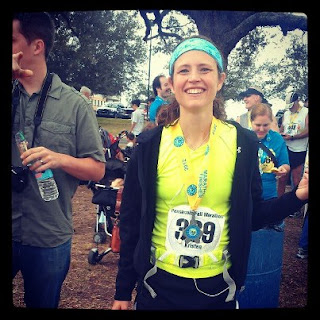 I have to say: this was an insanely fun weekend! A getaway with my hubs, a run with a sweet friend and lots of CARBS!!!

Lets not talk about how sore I was for the first 24 hours.  And that I am totally gonna run another half soon!  I got two minutes I need to beat!!

A special thanks again to my awesome hubby for so proudly supporting me and telling me over and over how proud he was of me.  For my sisters, Mishka and Rachel for braving children and loosing sanity so that we could go.  To Mollie for hosting us and making us laugh. And to Kristen for being an amazing coach and running partner (and friend)!! And Jesse for showing us how to run with a jacket!!

Now I am asking myself the obvious next question: 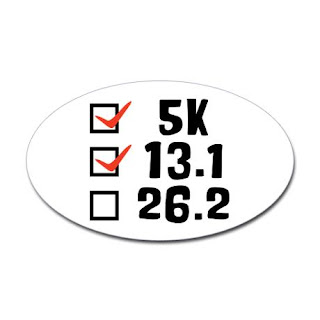 Who knows.  I have no plans at the moment.

Any races y'all are running? 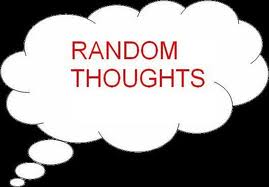 1.  Cooler weather secures my spending ways as I will gladly keep buying new bags of socks to replace the ones I refuse to look for.  Four kids and missing socks= insanity.

2.  You may call me a feminist if your definition is "one who looks on the division of labor in the home as 'see a need, fill a need- regardless of your anatomy.'"

3.  I am evermore convinced that there is no such thing as "getting caught up on laundry."  We are all "behind" at least 4-10 loads at any given point in time.

4.  You are not classified as a "mexican restaurant" if I ask you for cilantro for my taco's and you say you don't have any.

5.  I can see that a big cause for so much tension among Christians is because some seem to take some issues way more seriously than others'.  And feel that those "others" need to feel the same way as they do.  Creates a terrible outcome over and over again.

6.  The GNO (girls night out) is not about "getting away to refresh my spirit so that I can come home more calm, relaxed and ready to lovingly approach my children."  No, the GNO is solely to keep me from snapping on my children or as my sister M said "one more step away from the looney bin."  It does not, I repeat, does not mean I will come back a different person than when I left, it means I will delay the evolving into the monster I don't want to become if I were to stay.

7.  I hate that counting calories doesn't work like rollover minutes: the ones I didn't consume today can be used tomorrow.  Especially since I plan on not working out AND eating a ginormous cheeseburger.

8.  My kids made a song about butts being on fire.  I am trying to remember that they will embarrass their own children one day.  THEN it will be cute.

9. Will it be awkward when I get to heaven and see some of my legalist brothers and sisters in Christ eating dinner with people they NEVER thought would "make it?"

10.  I think I may lose more friends over my support for Rachel Held Evans than my participation in Halloween.
Posted by Rachel Garcia, CD(DONA) at 4:22 PM No comments: