we had our first food standoff today. It was quite humorous. I wanted him to eat one more bite of chicken before he could get down and he said, "no." That was it.. game on. He lasted 20 minutes before he finally caved. The sad thing is that he put that piece of chicken in his mouth three different times and then he would spit it out onto the table. So when he finally ate it... it was quite disgusting. What finally broke him, you ask? He wanted to see himself in the camera, which I told him he could if he would just eat his chicken. Fun times. 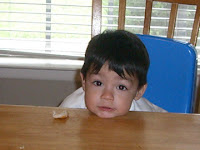 the beginning of the standoff 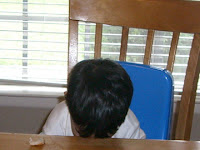 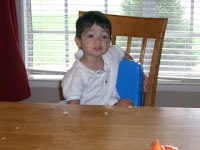 he is standing his ground 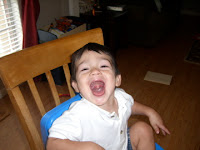 hey...i wanted to comment on this one. this cracks me up, but only to a point, because i realize this is what i'm in for. i got david to look at this and his first comment was, "just watch...fritz will go at least 30 minutes." oh boy! the thing is, he actually remembers doing this himself when he was a child. i think he was so stubborn that he actually passed out from hunger before he could down the dreaded carrots. anyway, i love that you took pictures. and that jorge wanted to see himself in the camera!!