No Soup For YOU! 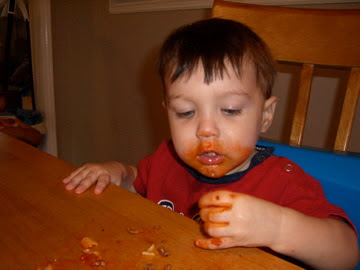 Okay so this boy is the pickiest eater ever. I mean he went to bed without dinner the other night because he was throwing the cheese quisedilla out of his mouth and onto the floor. Then the poor kid refused to drink the milk because I switched to whole milk (yes my kids had 2%). So how could you send this precious angel to bed without dinner? Because I can name on one hand the foods that he will ACTUALLY EAT! And I am not a pushover. I have the "kitchen is closed" policy. If you don't like it you don't have to eat it, but Im not making something else. But I will (for the baby) hold off on serving for a while and see if he likes it later. But seriously.. this kid is BAD! he turns his nose up at everything. It could be a brownie you are trying to give him and he will have to look at it to check it out first. That is what he is doing in this picture. You can tell by the food on his face that he liked the pasta, but when I put before him a piece of garlic bread.. he stopped the press and had to check it out. Which he spit out of his mouth by the way. So if you see my kid and he looks thin.. know that I do try to feed the boy..

On a funny note. After two years I changed my voicemail message. I had the idea to wait until both the boys were crying their heads off and in the middle of that record, "Obviously I can't talk right now. So please leave your message and I'll try to call you back when babies stop crying. Thanks." Well today was the day when both of my boys were crying as we were trying to head out the door. So the voicemail opportunity had arrived. It was perfect. Jorge even kept crying after as i was trying to press the stop record button. It was priceless. Sooo.. as we are all down for naps my husband calls and gets sent to voicemail. He was taking a small break from a surgery and was still in the OR room trying to be quiet.. as he hears me on the phone he thinks its really me on the phone and the kids crying.. so in his mind I answer the phone saying (with two kids crying) "obviously I can't talk right now...." he starts saying, "okay, okay babe I'll call you later" and then it keeps going. ..and then he says (more sternly) "Okay rachel, i'll call back." then he hears me say leave a message and he starts dying laughing. so his voicemail message to me was very funny because he had just figured it out and was laughing that it was not out of the realm of possibilities for me to answer the phone with the kids crying. anyway.. i thought it was funny.. but hard to type. fun times.
Posted by Rachel Garcia, CD(DONA) at 8:20 PM

Love the voicemail idea ... how funny that Jorge was the first to hear it. :)

That is too funny!

Funny. I hate it when I get caught talking back to a message!

Hey, Rachel--I just found the greatest thing, and you're going to love it. Go to www.deepthoughtsbyjackhandy.com, and there's a link in the upper right-hand corner of the page, where you can get a code to put Jack's deep thoughts on your blog. I just added it to mine, and had a good laugh. I knew you would enjoy it too.

Lana once ate a Baked Potato for like 5 meals straight. Yes the same one. She was probablly 3 and all of a sudden decided she didn't like them and wouldn't eat it. So thats all she got until she ate it.

We are horrible mothers Rachel, but its OK....thats what we're paid the big bucks for!