in which the homeschooler goes to school.. 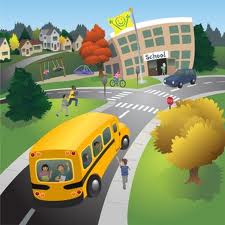 So what is the equation that allows the homeschooler to be enrolled in public school?

Yep, that's about it.

Four months ago my eldest, Jorge, asked me if he could go to school.  "Why?" I asked.  "Because I can't focus here. And can you make Isaac stop crying so I can finish my math?"

The kid had a valid point.  But I gave him my husbands lawn mowing head phones, industrial strength, and he seemed happy.

Fast forward four months to two weeks ago.  I had been in denial for about 4 weeks. I was overwhelmed, tired and frustrated.  While the homeschool day had worked with kindergarten it was way harder to pull off now.  I simply could not orchestrate enough consistency and quiet to allow for Jorge any time to learn, especially new concepts.

Then we got a dog.

Oh yeah.. that should make me sane.  That is a separate post entirely.  But God used the dog to show me how little I was actually getting accomplished anyway.  The morning of my "aha moment" I had spent two hours dealing with the dog AND I had gotten up early just to make sure that we got school accomplished first thing.  Needless to say, I realized how hard it was to pull this off and I then sat in a crying heap on my couch realizing the obvious: Jorge deserves more.

Sure, the schooling aspect was going GREAT!  I could teach and he could learn, all day long, if it were just the two of us.  He is such a willing student and a hard worker.  However, it's not just the two of us. I know that there are so many people that are able to pull this thing off, but I was beginning to lose it.  I realized just how tired I had become and, angry.  I was so tired of hollering out at the younger three "Hey, go find something to do!  Anything!! Just please stop interrupting our school time!"

I wanted so much more for them too.  I wanted to be able to do the "fun" things I was able to do with Alex and Jorge when they were that age.  Like, actually play with them.  I wasn't able to pull that off either.

So, I called the school to find out what we needed to do to enroll.

When my husband came home from work, I ugly cried explained what was up.  He did all he could do to contain his glee and said "I really think this is good.  I think it's going to bring a lot of balance to our home."  He has always been my biggest supporter, but had "suspected that it had gotten harder" for some time.  I wasn't in a good place and he could tell. I am so grateful that he allowed me "my process" and supported me no matter what.

The original plan was to wait until January, but an educator friend of mine (Shelley) recommended going on and sending him so that the teacher could assess him and start strong in January.  Of course, Jorge was thrilled with that idea.

So he started December 3rd.  I think the highlight of his life was the fact that he would finally be able to ride the school bus with all the neighborhood children he already knows.

He woke up at 5am that morning, dressed and ready to go. I was excited too, since I had been in contact with his teacher, Ms. Davis, via email and her excitement curbed some of my anxiety.

Of course, I mourned as well.  Sadness over not having my sweet leader boy here with us all day. But I knew he would be having fun and thriving!

On his first day, we took him to school and then he rode the bus home.  Then after that day he would ride to school as well.  I asked the grands to come celebrate his first day! 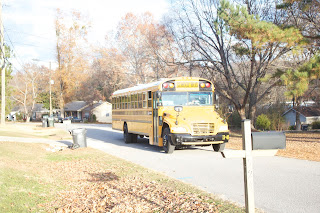 The crowd of supporters! 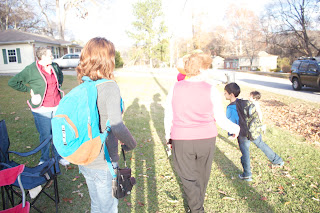 He is so happy! 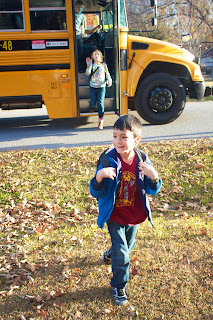 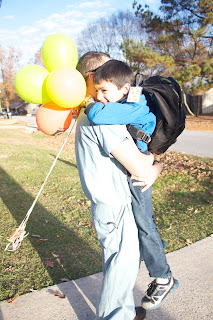 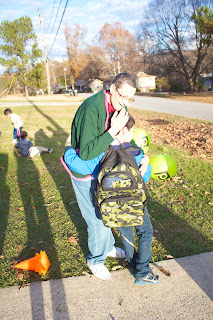 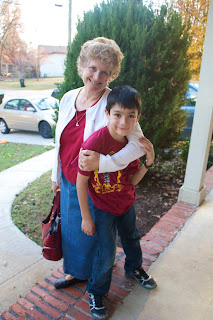 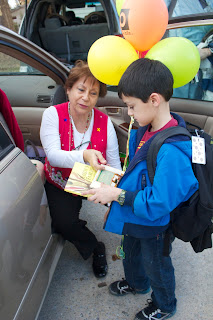 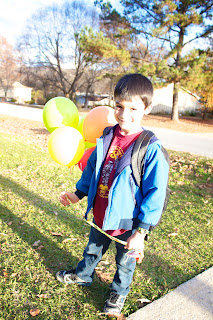 I will say that the second day was harder on me than the first, but we got through.  And now I simply adore 3:35 every day! That's when he comes home.  Of course, he is doing so well and his teacher has had nothing but good things to say.  I am also so proud of him!  He was able to stand up and "do what's right" without me being there!  While on the playground his fourth day, he realized some of the other boys were playing a game of "hurt the girls" and he told them (what he has heard from infancy) "God made you strong to protect girls, not hurt them" and they told him "whatever, we will do what we want."  So Jorge went to the teacher and told her!  My good little "tattle teller!"  Ha!  The best time to "tattle" is when someone is going to get hurt if you don't.  That event was such a great conversation starter for us  (as well as him telling me that one of the boys later sang a song titled "women's boobies, women's boobies"  I was extremely thankful for that conversation as well).

I am hoping that given a couple of years, I can return to homeschool.  It will continue to be, as it always has been, a year by year review.

I really appreciate all the support we have gotten.  As I know this issue is very controversial to many.  To us, we are celebrating this season and know that God is in control of ALL.  Praising God that after all these years He is still faithful to teach me and stretch me in the places I tend to think "I'm okay here."

Part TWO of this series is linked here: My exercise in transparency.
Posted by Rachel Garcia, CD(DONA) at 4:40 PM

Awwwww! I'm so proud of little Jorge too for standing up for what is right and so proud of you and big Jorge for teaching him what is right! I wondered how it was that he started going to school. You are very brave for listening to God and doing what you felt needed to be done and I must say that I am also impressed with big Jorge in his faith in both you and God to work it out. This parenting gig is not easy at all! Jorge sure does look happy about going to school for now. And as you said, this is now it may be later too but I admire your faith and trust in the Lord to show you each step at a time.

Thank you so much for sharing your journey so honestly. You are truly an inspiration.

Thanks for sharing your story and being willing to do what needed to be done for your family at the time in which it needed to be done!! I'm a huge proponent of this, and of not "marrying" yourself to homeschooling. I hope that if and when the time comes for me to make that decision, I do it with as much grace and transparency as you have!