Tough start but getting better as the day goes on.

Today was starting out very badly.  Not because of anything in particular.  Just the whole scenario itself.  We have been cooped up inside for a week because of sick littles and it finally was taking it's toll on me.  Im a home body so its saying a lot for it to finally be getting to me.  The kids were done.  And by that I mean, they have been staring at the same toys, movies, games, etc for a week and were getting cabin fever.  So was I.
After five days of antibiotics the boys (who had walking pneumonia) are doing so much better.  Jorge still has a cough occasionally but I called the nurse this morning and she told me that you take Azithromiacin for five days and its still in your body five days after that..so its still working for him to help get rid of the cough.  But that he is NOT contagious.  Which is good because I have not seen a single soul or my kids had a single playmate in over a week and that bit of info was music to my ears.
So I decided to take them to B & N for a little train time.  Alex played with the trains for an hour (usually lasts about 30 minutes) but he was so happy to be out of the house he extended his self control and ability to not throw the trains for and extra thirty minutes.  LOL.  Jorge also did very well.  He kept bringing me book after book to read with him.  Which brings me to something.  A question for all you mom's with boys.  My son will be 4 in June and he is fascinated with not only Spiderman and Batman but also, eh hem, princesses and Ariel.  I know this is normal but for how long?  Ha.  Im not nervous.  Its just that whenever he brings me these "princess" books I try to get really enthusiastic when they talk about the prince character and ask him if he is a prince like Eric or Tritan.  That's when I get the response, "No mommy, I a mermaid.  I a Dash Mermaid."  Which is funny because he always says he is Dash from TheIncredibles, but I guess he is a fast mermaid too. I dunno. I will say that whenever I say something like "Don't stand on that, baby, you'll get hurt" he replies, "mommy, I not a baby. I a wild man."  He is all boy for sure, but at what point do you get a little concerned with the fairy stuff?
Any thoughts?
Speaking of the little fella, here are some pics of his recent visit to the bowling alley.  It was his first time.
He looked so cute.  Check out his little bowling shoes. 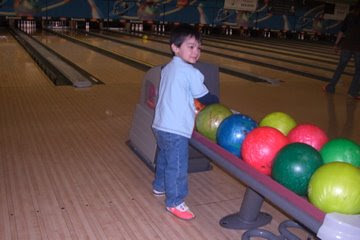 Taking the ball over.. very carefully. 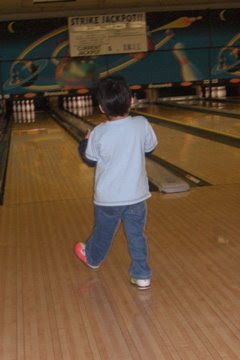 Setting it down gently.. and then ever so gently pushing it.  No matter how many times I said "Jorge you gotta push really hard." We even tried the granny toss and that didn't help. 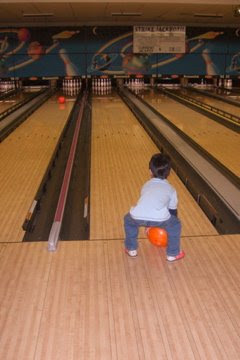 It was taking a while to get to the pins.. So he waits.. with hands on his hips.. to cute. 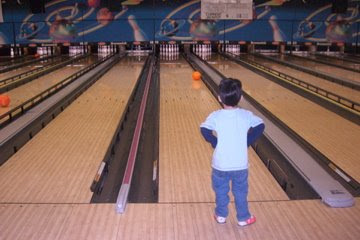 this time he decides to squat while he waits. 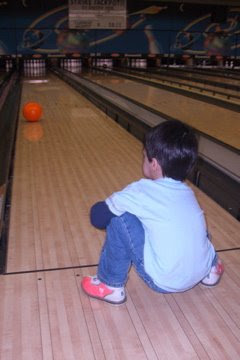 He is a funny little guy.
Posted by Rachel Garcia, CD(DONA) at 2:33 PM

Email ThisBlogThis!Share to TwitterShare to FacebookShare to Pinterest
Labels: being a wife and mom, funny, just wondering why, life with kids, pics

I'm glad things are getting better for you guys. Keep it up!

I wouldn't worry about the princess stuff. Logan loved to play dolls and house with Lana around that age. Of course it made Stacy crazy ;)
But considering how boyish he is in everything else, I would chalk it up to "trying to figure it all out" and humor him.
Now, if he starts wanting to dress up like the little mermaid and wants his birthday party to be a princess party, I would run very quickly to the superhero aisle at Walmart and buy him everything you can ;)

Tell him he is a "merman"- a boy merperson. and as Mark says it is fine just as long as he (Levi) is not dressing up as a princess when he is 17 it will all work out fine. They are just figuring out who they are.
m

I'm glad to read these responses too. I was a little worried when Fritz was on his "Cinderella" kick, and he still points out the princesses in stores, etc. But I'm taking comfort in the fact that he is and has been "The Lone Ranger" since last fall, and he won't let you forget it.

Those bowling shoes are killing me! So cute!

I had a meeting of 11-12 year old boys in my house yesterday that all sheepishly agreed that they still liked Barbie sometimes. I think they may be enjoying her for other reasons these days, but needless to say I quickly moved us on to another topic....

My boys have always appreciated feminine things. I just made it a point to talk about their role in relation to a female. Such as, "Yes, that is a sweet story about a Princess. How should a Prince like you treat a Princess? No, you can't wear makeup because God made you a man, sorry that's just the way it is. You can put on some war paint or you can help me with my makeup. Look at that sweet baby doll. Love her and be a good daddy!"

Just don't make a huge deal about it. Help them interact with all aspects of life by understanding their God-given role as a male.

Graced always has the perfect thing to say. :)