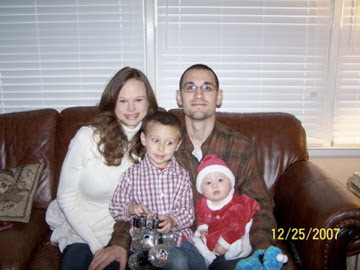 Please pray for McKaylee Borkland.. she is the 7 month old daughter in the picture above. Here is a quick story of what happened as well as an update from a Dr.'s visit from this morning:

Recap: Jessica (Britt) [SMCS grad] and Stephen Borkland’s 7 month old baby, McKalee, fell off the bed a few nights ago and hit her head on the wood floor. She was taken to the hospital and examined and it was discovered that she had a previous condition that was causing her brain to swell (her 7 month old head was the size of a 9 month old). They operated yesterday afternoon and put in a shunt. During the surgery a mass was discovered deep in the center of her brain. The surgeon was not willing to try and biopsy the mass as it was too deep; however, he said it does not look like it is cancer, but he cannot be certain without a biopsy which they cannot do. She is too young to treat with chemo and radiation so we’re asking God to remove this mass without His use of chemo and radiation.

McKalee was doing fine last night, acting like a 7 month old despite the stitches and swelling. Jessica is having a hard time. They have told them that they are being sent home today and she is nervous about being responsible for post-surgery care; so prayer for Jess as well please. They will meet with an Oncologist this morning, just in case; and have to return to Children’s in the future for MRI’s to examine the mass. Again, I’m praying the next time they look it will be gone.

Okay, she had the MRI and it did show that she has some type of brain tumor. It's in the center of her brain and very deep so during surgery, they weren't able to get a biopsy of the growth. That is, however, what caused the Hydrocephalus so that mystery has been solved, but as you can imagine, the news of a tumor is horrifying. She had a shunt successfully put in her head yesterday and tolerated the surgery well, so that is encouraging. We'll just have to take her back to the hospital every 3 months for her to have an MRI to check the growth of the tumor. If it does turn out to be something that grows and causes problems then they will most likely treat it with chemo and radiation, but it would obviously have to be when she's older b/c she is too little to handle that right now. So we're just trying to celebrate the little victories in this situation and just trust God for the results. It's obviously an extremely hard time for us right now but we're pretty much keeping our sanity by being covered in the grace of God. Please continue to pray for little McKaylee and our entire family as we try to deal with all of this information. Thanks to everyone!
Posted by Rachel Garcia, CD(DONA) at 3:57 PM

I will most certainly pray for McKaylee and her family.
And what's the news on you?

Any news on little McKaylee? You doing all right?