Its 3:30 a.m right now.  I had to do an online confession.  I am a whipped puppy dog.  I don't know what is the reason, solely, for this behavior but there is now no denying the depths to which I will go.  But this little thing ... 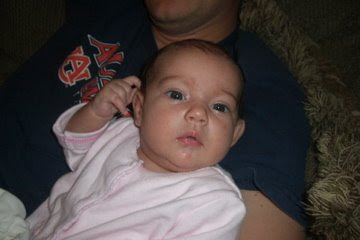 has me doing things I did NOT do with my other children.  I don't know how much of it is because this is our last child (by birth..see more about that here) or is part of it because she is a little girl?  I hate to think that I am whipped because she is a girl because I love my boys like crazy and obsessed over them too when they were ity bity.
So what happened, you ask?  She has been successfully sleeping through the night for two weeks now.  For 10-12 hours.  She dropped her 2 a.m feeding that long ago.  I feed her at 8 p.m and she will wake up some time between 6-8 a.m.  Not once has she made a peep through the night.  Then an hour ago she started to wake up.. just a bit fussy.  She was obviously going to start crying..which she did.. but not for long when I (GASP) went and got her.  Normally, I would just let my littles cry until they went back to sleep.  I know for some that is unthinkable, but that's the way we do it and our kids have always had great sleeping habits.  But today (or this EARLY morning) I took it a step further.  I actually (GASP AGAIN) fed her!  I fed the child who so obviously doesn't NEED to eat since she has already adjusted to those long nights.  As my big sister says, "if they can do it once they can do it again."  And she had done it for two weeks!  What was I thinking.  But even as I was sitting there on the couch feeding her at 3 a.m.  I was just staring at her.  She was so cute! I mean really who could not adore that sweet little pudgy face?
I guess it's not the worst thing in the world, huh?
I'm a lost cause.
going to bed now.. and she is blissfully asleep in her bed again..
Posted by Rachel Garcia, CD(DONA) at 4:33 AM

Email ThisBlogThis!Share to TwitterShare to FacebookShare to Pinterest
Labels: life with kids, pics

Oh girl, I'm sorry for the fatigue. I'm sympathizing over here. B/c E. is our last one we plan to have (before adopting again), I do think part of that emotion factors in. He slept a few weeks, all night, and then it all fell apart, around 4 months. I think it was a growth spurt, and total lack of discipline on my part. So, we're up several times a night....Oh well. They are too adorable. In the morning, even tired and dragging, I look at his sweet face and realize I don't resent him one bit. I'm betting you're the same way. Eva is adorable.

Just in case you are intersted we have a Park Pals facebook group where we plan little outings and get togethers with the kiddos.

(you will have to cut and paste into browser)

Rachel, I just got your comment about the thrift stores!! (blogger hasn't been emailing me when i get a new comment...) THANK YOU...my mom and I were talking about where some other good ones would be. And we had no idea!

It's a whole new (exciting) world for me. Though, I still love a good sale on new clothes. I went to a consignment store the other day and the outfits were just as much as I could get them for on a clearance rack.

OH, and Eva is getting SOOO cute! I love her coloring...looks like Olivia did when she was a baby! And I definitely had nights I just 'looked' at Lilian. She was much cuter than the other two in the middle of the night...I guess I appreciated the baby stage more! ;-)

and I spelled my daughters name wrong....LILLIAN! :-)