The older boys' closet.. BEFORE: (when i opened the door, the stuff fell out.. haha.. obviously need to work on teaching the boys how to "clean up" better). 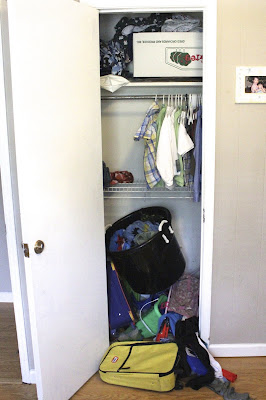 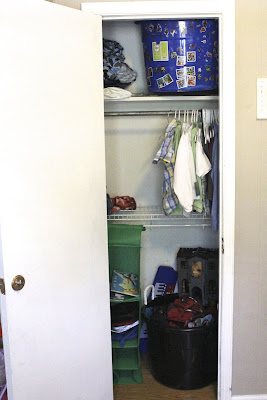 Eva and Isaac's closet BEFORE: 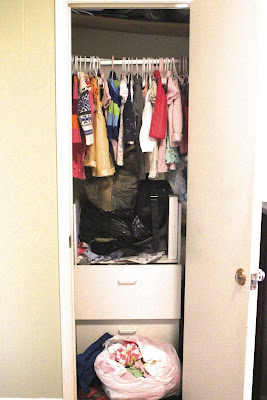 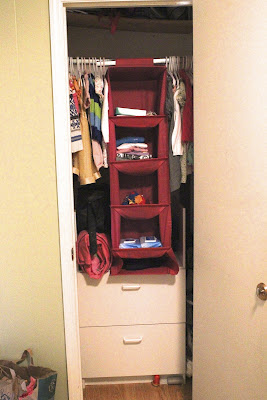 Total: $1.58!!
2 fabric organizers. (clearance at Old Time Pottery)
With the boys.. I had to purge some toys. The bucket is for their costumes and dress up stuff. The blue tub at the top (in the AFTER pic) was the old toy box. I took the rectangle one from the living room and put it at the end of their bunk beds. (hello recycle). I set up the little organizer for books and their backpacks, leapster bags, etc.
Eva's closet was a hot mess that just needed some attention in order to go through the vat of clothes she has acquired. I also had to get rid of the smaller clothes in the drawers so that I could make room for Isaac's stuff, since he has been sharing a dresser with me for the past year. So now, they are both sharing that closet. Even though she sleeps in the other room with her older brothers. Eventually she will be sharing a room with Isaac. I also had to purge a lot of stuff in there.
Now the back of my car is loaded up with goodies for the thrift store.
This job included a lot of purging and organizing what was all ready there. The cloth shelves are great though.
Posted by Rachel Garcia, CD(DONA) at 11:40 AM