Well I think I recognized my limits today. I had this great idea last night that I should take the kids to the Zoo today since its been so beautiful outside.   I invited Jen W.(you really need a blog, btw)  and her son Fritz to come with us.  We had a late start and got to the Zoo around 10 a.m.  I wasn't in any pain.  In fact, this time post-partum has been awesome in that regard.  What I didn't count on was how exhausting the whole venture would be.  I had Eva in the sling and Alex walked alongside Jorge.  But its still daunting to keep Alex "in line."  I also had to stop to nurse Eva while there..not that big of a deal for me.. just time consuming.  We were there for an hour and a half and still didn't get to the lions and tigers.  Seriously Jen, what were we doing that whole time??
Then we went to get lunch afterwards at McDonalds and by that time my whole brood was d.o.n.e.  Tired and letting me know..more so Alex.  It was on the way home that I realized how exhausted I was and was praying that the boys would not fall asleep in the van, therefore bypassing a nap at home.  All was well until we got to our exit and I realized that Jorge had just fallen asleep.  I was heartbroken.  I so desperately needed a nap.  So when we got home I put Alex in the bed, fed Eva and got her to sleep and then put Jorge on the couch with me and laid with him until he FINALLY fell asleep 35 minutes later.
At one point in there I was seriously going to cry if he didn't fall asleep.. i was that tired.  When I called my sister this afternoon I was mentioning all this and she said, "You went to the Zoo?  Rachel.. its only been three weeks.  Your sleep deprived and the Zoo is a BIG deal."  Thats when the light bulb clicked in my head.. its not just about pain per se.  Its also watching what you do because of sleep deprivation.  It clicked as to why I was so snippy with the littles while at the zoo.. so much for fun.  Although, I think we still had a good time.  And of course I have some pics..  (and special thanks to Jen for helping me while there.. sorry my kids taught fritz how to go through the "tunnel.")
The boys checking out some of the reptiles..Fritz wearing the cute hat.. 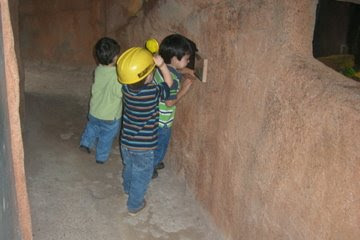 Jorge and Fritz checking out the monkeys 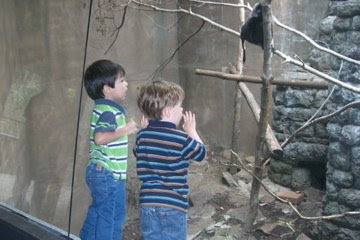 Riding the train.. Jen I didn't realize that you were trying to avoid the picture..shame shame 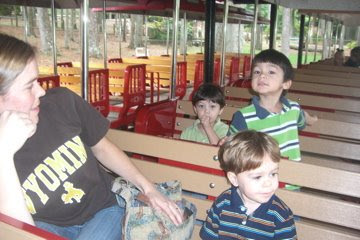 Of course I am the only one actually looking at the camera! 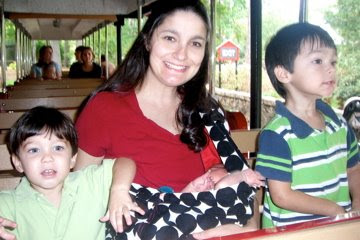 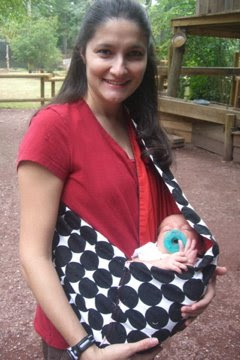 For the record.. i do not like this paci!  Its HUGE! notice half her face is covered... but its the only one she will take, as of right now.. I'm working on getting her to take the Nuk.. its a slow process. 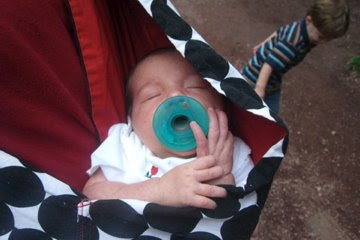 Ahhh... sweet sleep!  I was so excited when those sweet little eyes FINALLY closed! 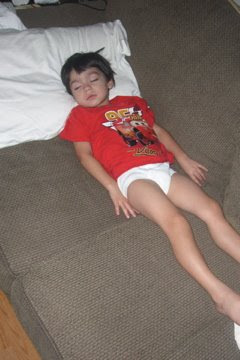 All in all it was a good day.. just don't think im ready (sleep wise) to do a big event like that.. not for a little while at least.  And a HUGE thanks to my SIL and BIL who came by the house this evening and picked up the boys and took them to the park for two hours. WOW that was awesome.
Talk at you guys later.
Adios!
Posted by Rachel Garcia, CD(DONA) at 10:11 PM

oh gosh, i feel terrible! i didn't realize how tired you were, or that it was that exhausting for you. i'm glad everyone got to rest a little though. fritz and i had fun, but i could tell you were overwhelmed. next time (waaay down the road)...double stroller and only one child walks (or i'll have both hands free)! plus an earlier start would be better. we covered about half the zoo...and with four children ages three and under, i'd say that's not too shabby! hey, we may not have made it to see the kitties, but at least we didn't pay to get in. i'd love to do it again, but in the meantime, let's just stick with activities where the mommies can just sit and supervise!