For the boys: Great! For mommy: even better!

Well yesterday the boys started Mother's Day Out!  They will be going Monday's and Thursdays.  It was a little traumatic for Jorge only because I dropped him off at the wrong room and then they switched it on him.   He was not happy.  But when I called back to check on him they said he was happily painting at the table with his "friends."  When I picked both of them up they had had a great time.
Mommy on the other hand had a GREAT time.  Now do not read here that I am in any way ready to send my kids to school, but a girl could get used to this.   My day was already a plus because one of my bff's was in town, Shelley.  She and her husband, Jim, were in town from Columbus bc Jim had a job thing.  So they were able to visit on Sunday and Monday.  They also have three littles the same ages as our kids, but their two older ones were in Columbus with their grandma (Linda- who occasionally leaves comments on my blog..and I LOVE HER!).  Which meant that Shelley had her six week old, Naomi Hope with her.  So when I dropped off the boys at MDO Shelley and I took our two girls out.  We went to Babies R Us where Shelley bought me the cutest nursing blanket you've ever seen.  I'll have to get a pic with it.  I also got to nurse at Babies R Us while sitting in those fabulous $500 nursing rockers.  Fun times.
After that we went to lunch at Chili's and both had the yummy chicken Caesar salad.  YUM!  Our waitress didn't exactly get the best picture of us ( and no lighting) but it was a fun time. 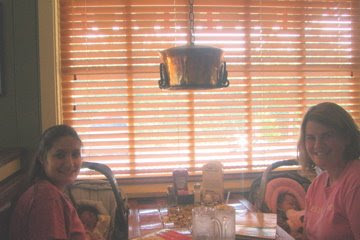 It was so nice heading out with just one child, that was also sleeping through the entire lunch.  Ahhh..
But do not be deceived.. when I got home it was back to business as usual: 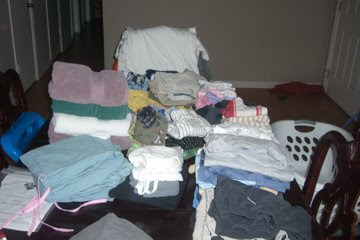 as I folded and PUT AWAY four loads of laundry.  I was on a mission.
Today, Tuesday, was the first day of Bible Study starting back at church.  I went and took the boys to the nursery and was able to introduce little Eva to all the wonderful women who have been praying for her since we found out we were having another little one.
I am so excited to get back into a schedule.  And that being said by someone who is not normally good at keeping schedules.  I do have to say that I am also excited about school with Jorge (at home) and teaching him his letters.  My sister hooked us up with some Hooked on Phonics "stuff" that I am going to be using.  I also noticed today, while reading books with Jorge, another thing on the agenda that needs to start.  As I was reading the book he was saying the story, verbatim, right along with me.  This clicked the light bulb in my brain that it is definitely time to start doing some Scripture memorization with him.  So that is exciting.
Well I am going to run.. gotta nurse a baby.   Two weeks old today and she is already like clockwork every three hours.  Makes me proud.
Adios.
Posted by Rachel Garcia, CD(DONA) at 2:21 PM

Email ThisBlogThis!Share to TwitterShare to FacebookShare to Pinterest
Labels: being a wife and mom, friends, love my life

Too cute!
I remember lunch dates where all babies present would sleep through lunch . . . so fun!! It kinda feels like playing house!

Did you say HEY to Mary? Please bring her by the next time you have her at BPC!! I can't wait to see her! She looks tiny! And again VERY adorable!!

It was fun for me too. But very tiring, there is a lot of fact in that old adage "I know why God allows the young to have children" By the second day I was worn out! The best two grandchildren ever and so fun to be with, I only wish I was 20 years younger! Thank goodness for Pop Pop's help. But I am so happy that Jim and Shelley got to visit and have a little breather. The kids where so excited to see them when they came to pick them up. They had to show Mom and Dad how T-man has mastered pedaling his bike. Smiles all around.