Before the birth of a child, my husband and I, go out on a date that he dubbed the "Last Supper."  I guess because we know it will be a while before we can get out again, just the two of us.  So last night was our night.  In the past we have gotten dressed up (which my husband LOVES to do.. and I am absolutely serious) and have gone to Copper Grill.  Well let me qualify that.  With or first child, Jorge, I was in the hospital for a week before we delivered so our "Last Supper" plans were almost foiled but my awesome husband went to Copper Grill and got it to go and brought it to my room the night before I was to be induced.  All the nurses were so impressed.  With our second, Alex, we knew what day I was to be induced and had our dinner two nights before at the same place.
Well now Copper Grill is closed and I am not so sure what restaurant replaced it but I had a craving for something different anyway.  Big Jorge wanted to take me to Flemings, but I was craving of all things, Hibatchi.  I wanted some good ole' Japenese Hibatchi.  He was happy to oblige his pregnant wife and so we headed to Stix in Hoover.  YUM!
We had a great time talking and cracking up that the cook kept giving me extra everything because of, well, the baby I needed to feed.  GREAT yummy food, not great for pregnant lady with diabetes.  Well not the rice anyway.  I also tried Sushi for the first time: the California Roll.  No worries though there is no raw fish in that one.  Of all the times my husband has ordered sushi I have never had any desire to try it, until last night.  He was so proud.  He is making me more "cultured" everyday.  HA!
We did get a pic of us ....
Aww.. I actually like this picture of both of us.  Im going to crop it and frame it! 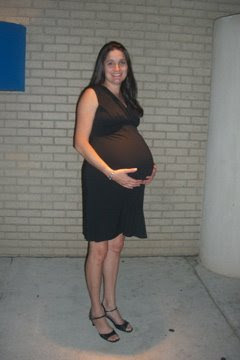 This one is from September 2006 with Alex at our last supper.. notice same dress!   Ha! Which belly do you think is bigger? 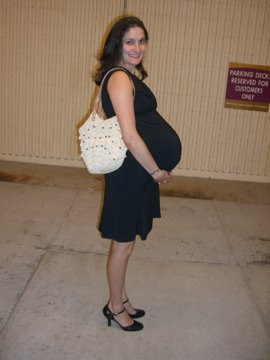 And of course he was thrilled to take this shot! lol.. he doesn't have a belly.  but he sure is a hottie. 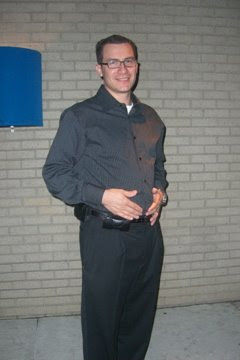 Like I said, we had a great time.  Its funny to think that we are doing this all over again.. the whole newborn world.  Although it has only been a short two years since the last one.  It still seems surreal.  Oh and after we left the restaurant we "had" to go to Belk so that he could look for a Pink dress shirt in honor of Eva.  Of course we found one and thankfully it was on sale.  I'll have to snap a picture of him in his very pink dress shirt and show the world!   But he is so proud.  His whole world is about to change getting this little girl.  She is going to have him wrapped around all her fingers!   Ha!
Posted by Rachel Garcia, CD(DONA) at 1:53 PM

What a fun tradition and cute pics! If it weren't for the purse, I would be confused. I think the bellies look the same!! You look great! :) Congrats on your "soon to be here" little girl!! Matt would be so jealous!! :)

You are the cutest pregnant girl ever!

We went to the Copper Grill once too and LOVED it! When we went out last week we did try the place that took over. It was really good, but it just wasn't the same as CG. No more twinkly lights on the ceiling :(

okay, so i was looking at the first picture, and thinking to myself..."hmm, that's strange, i've seen this shot before." then i scrolled down to the one two years ago...ha ha ha. you had me confused for a second. gosh, i had forgotten how much Alex was sticking straight out! you're all belly!