Haven't we done this before?

I am not sure if you read this post back in May, but it seems we were doomed to repeat history.
My thursday morning was off to a great start with both boys playing happily in their rooms while I took a shower.  I always give Alex some toys in his crib, turn some music on for him, give him a sippy cup of milk and he's good for at least the 30-45 minutes it takes for me to take a shower and start breakfast.  Most of the time he only stays about 25 minutes in his crib and then I let him run around the house.
Anyhoo. . I had big plans for the morning of running several errands and had even contacted a friend to let her know that I would probably show up somewhere around 10 a.m to pick up some things she had for me.
Well, then I went into Alex's room to get him out.  He happily handed me his toys and I happily put them back in the toy box.  He handed me his sippy cup and I set it on the dresser.  Then I looked at my sweet angel and said, "Alex, you want up?  Okay honey, say 'up'."  To which he responded with "No."  But its a no that is raised in pitch as it reaches the "o" sound.
Time: 7:45 a.m.
I tell him, "okay, little guy, then you can stay in here.  I'll check on you in a little bit."  I go in and out every 10 minutes or so and I get the same response.  He refuses to say "up."
Time 9:00 a.m.  Its been an hour and 15 mintues.  And this is his little self in the bed. 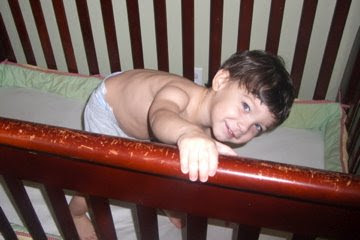 I'm sure you can't tell without the "mother of this child's" eye, but he is giving me a look that reaks of "I ain't budging lady."  And he didn't. I had to call my friend and tell her not to expect us anytime soon.  and I had to come to terms  with the fact that we may not be going ANYWHERE that morning.  At one point right before the THREE hour mark, I went in and said, "Alex, just say up."  And folks, I kid you not, he mouthed the word three times but would not say it.  I actually told him, "honey, mommy can't hear you say it loud for me." Then he said, "Uuuuu" the beginning sound of up, about two times before I said, "fine. see you in a little bit."
Well at 10:50 a.m I noticed that it had gotten really quiet.  Now he never really cried during the time he was in there.  In fact I would hear him laughing and playfully kicking the walls.  But when it got quiet I went in to check and this is what I found: 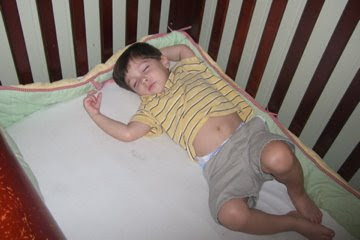 That little booger WENT TO SLEEP and slept for TWO HOURS.  Well as you can imagine, I was quite shocked. Everyone kept asking me if he said up when he woke up.  Let's just say I compromised.  When I went in there I said, "Alex, do you want to get up?" and he said "Yeah." So I took that.  Now let me say, it is not the standard that he is supposed to say "up" before I get him out of the bed.  I just simply thought that morning, "hey, lets test the obedience of my toddler."  Well, boy did I get a test.
Posted by Rachel Garcia, CD(DONA) at 10:09 PM