Wow.. i have not felt like blogging. That is so weird for me to say.  I guess each time I think about the actual brain power it takes into jotting my thoughts down, I got a little overwhelmed and decided to just "wait 'till later."  And since I am the worlds best procrastinator, later never came.  But rest assured my faithful readers.. it had nothing to do with you.. it has everything to do with surviving off of very little sleep and then surviving by the skin of my teeth during the day.   Now onto some blogging randomness.  I need to cover many things...
Four weeks into this thing (having our third baby) I still believe that going from two kids to three is still easier than going from one to two.  I think mostly because your confidence level is way up and you can roll with the punches better.  However, the lack of sleep is harder.  I think because at this point your kids are toddlers and they want serious play time or NEED it.
Funny story.  At 4:30 a.m this morning I said a prayer.  Simple and to the point: "Lord, please please please allow Jorge to sleep in until 7 a.m (he had been waking up at 6:30).  That would be so helpful Lord, really."   Well, apparently the Lord has a sense of humor.  Jorge did in fact sleep until 7 a.m.  BUT Alex woke up at 6:30!!  I guess the next time I will be a little more specific with my prayers.
Annoying habit.  How do you keep your child from constantly sticking his finger in his nose and then putting it directly into his mouth?  The nose thing is really the bad part.. today he made his nose bleed bc he kept diggin'.
Pep talk.  I had to call my sister Mishka today for a pep talk.  Its the same talk I've had every time (around this time) post-partum.  Let me give you her response and then see if you can guess what I was complaining about.
Her: "Oh Rachel.. it takes nine months to get your body like that. you have to give it more time to get back to normal."
Yes. I was frustrated when I tried on "regular" clothes only to see that the buttons on the capri's I was trying, were not going to go within five feet of each other.  But I know, I know.. its only been four weeks.  The frustrating part is that I am back down to my pre-pregnancy weight.. just not the inches around the waist.. but all in due time.. Im not obsessing about looks here, per se, I just want to fit into regular clothes bc the maternity are too big.
Praise Report:  Big Jorge and I went to Cold Stone Creamery the other night (Amen..) and I ate a strawberry shortcake thingy and it was huge (probably why my pants don't fit) and when I came home and checked my blood sugars it was 110!! and that was only after an hour!  God is so awesome!  four weeks ago that same thing would have put me into a diabetic coma!
Well I am going to go.. I hope you all are doing well.  Can't leave you without at least one pic. 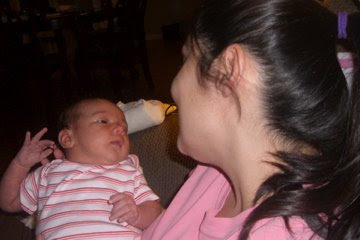 Don't get down on yourself about it! I know it's easier said than done but you'll get there:) You look great for just having had a baby.

The only nose picking advice I have is what I used to do with my students. When I'd see them digging in their nose I'd simply tell them to go wash their hands. Some kids had to go back and wash again after just a few minutes. I don't know if it worked but it made me feel better.